Here is the cover for Xina’s latest novelette. With her zany sense of humour, the book is bound to be a treat.

Today is the day for the cover reveal of my novelette! I’m flailing around like Kermit the Frog. What do you think? Does it look like the best thing in all of creation, everywhere, at all times? (Errr, okay, maybe I got a little carried away there). My cover designer is Yoly from Cormar Covers, who is not only talented, but also reasonably priced. 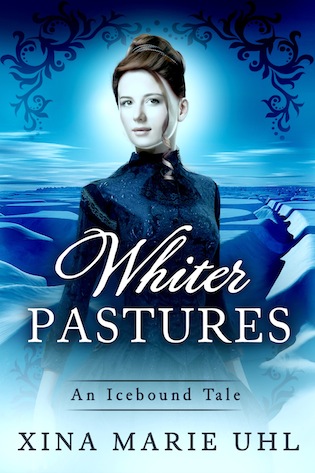 A romantic novelette in the Icebound series, an ongoing collection of polar delights.

Behold dogsleds and penguins. Howling winds and cold, pitiless wastes. This is Antarctica, where the intrepid inhabitants of the frozen ends of the earth battle the terrain, and each other, to find…

A hmmm moment. Recently I read a reference to windows that intrigued me, so I did a little digging. Just a little as it’s a huge subject. During the 1st. century A.D. Phoenicians developed a technique of blowing glass that created a variety of shapes. Once Rome got hold of the process and started using it in architecture, it soon spread throughout the Roman world.

Window glass, initially called crown glass, wasn’t developed until the 7th or 8th centuries. The process began with a ball of semi-molten glass on a blowpipe that was wide at the end – like a crown. It was then transferred to an iron rod and flattened into a disc shape by reheating and spinning. The centre formed a ‘bull’s eye’ which is one of the features of antique glass today. Because this method limited the size of the glass, pieces were joined together with lead strips called mullions.

At that time and for a long time afterwards window openings were covered by sheets of thin horn or linen soaked in oil and nailed to a frame. Wooden shutters were also used. These methods, I’m guessing, kept out light, but not the cold, leaving houses dark and musty.

Here’s the part that piqued my interest. In the fourteenth and fifteenth-century glass windows started to replace the oiled window coverings in the homes of the well-to-do. They were very expensive and therefore prized – a status symbol. When our thrifty ancestors moved from one house to another, as the well-to-do were wont to do, the windows were taken out and safely stored away until they were needed again.

The practice of constructing removable windows caused strife in some instances. A tenant might regard the windows as his and carry them off when he left. A certain parson who quarrelled with his diocesan superior made off with the windows and doors! Suits were filed in the courts. Initially, the law was uncertain and it wasn’t until the 16th century that judges decided glass windows were fixtures and not movables.

With gratitude to Phoenicians and other contributors, it is time for me to enjoy a glass of wine. Cheers!